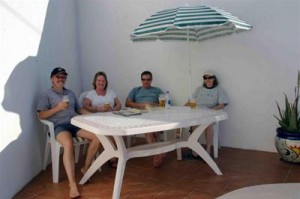 It’s funny how when we can’t do anything we start thinking about the things that we really must do. So it was with me when I broke my leg – sitting there thinking about all the things I’d meant to try but never got round to doing. That would all change when I got back on my feet again, time was slipping by, I wasn’t getting any younger.

Well the learning to windsurf bit was comparitively easy – just take some lessons and get used to paddling a sailboard back to the shore.

But the Lands End to John O’Groats cycle ride, well, that didn’t really get off the ground. Six months later and I still hadn’t done any more than ‘intend’ to do it. Losing a stone and a half pretty much went the same way.

Until, that is, I blabbed about it to my friends Jon and Lin Jones over a few beers whilst a guest at their place. Suddenly it became serious. Jon wants to come with me! When am I going? Have I got the route? Not only that but he’s signed us up to a charity too. Me and my big ideas!

Time for the talking to stop and the training to start – it’s 1000 miles whichever way you look at it so at almost 14 stone I need to shift some pounds. Just because lots of people complete the ride every year doesn’t mean its easy. Must get round to doing some training – bit cold though. Oh, yes, and Jon needs to buy a bike.

Christmas 2010 came and all of a sudden September 2011 seemed more of a reality so Jon finally bought a bike and we both went out pedalling around our respective local lanes – mine around my home in Stratford upon Avon and Jon around his in..er…Spain. Hot work, this called for a lot of early starts as it can reach 40°C over there, but Jon managed up to 30 miles every other day without dropping down from heatstroke (no problem with that for me).

I managed some 5.30am starts and got a few miles in before work, and even managed the ride to work and back (52 mile round trip) a couple of times. Visiting my brother 30 miles away took on a new dimension when made on a bike. Even shopping at B&Q became a chance to get a few miles in.

The weight isn’t a problem any more either – cycling certainly burns the calories and the stone and a half soon went. Loaded the panniers up with pop bottles full of water so its not too much of a shock when I’m fully laden on the trip – the bike seems light as a feather when I take them off to go shopping.

Last week before the off. First few days accommodation sorted, coach back to B’ham from Inverness booked with megabus.com for £25 – result! but the bike courier can’t do Sunday from John O’Groats so we have to take a day out of our itinerary ( that’s our rest day gone I suppose) and get them collected on Saturday. Sponsorship still coming in (thanks everybody) www.justgiving.com/jon-jones0/ We didn’t set out originally to do this for charity but decided it would be a wasted opportunity if someone didn’t benefit from it, so hopefully The Rifles will receive much needed funds to help with the good work that they do.

Friday.
Drove down to Cornwall today. Where did all that traffic come from? The M5 was busy all the way. Four people and two bikes in a hatchback – not great. The back end of the car was so low we had to remove the wheel from Jon’s bike to stop it dragging on the ground!!

Had a look at Lands End today then drove to St Austell and booked in to a B & B. The Cornish hills look formidable – we’ll be glad when we have them under our belt. Seems a long way on a push bike but there were a good many cyclists at Lands End having their photo taken (at £16.50 for two) so I guess if they can do it then we can. Photographer used a film camera. None of this modern digital stuff!
Start of Karaoke ensured that we left the pub at a sensible time. Early start tomorrow. 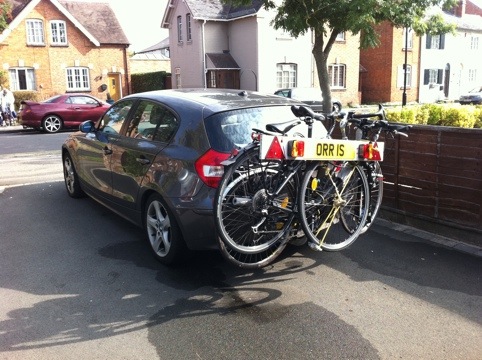