Day 6 Shrewsbury to Warrington
67 miles
Best day so far. Small roads through tiny villages, watching groups of sparrows, tits and finches raiding the hedgerows. I even saw what I thought was a kestrel in a field.
Another river to follow, this time it’s the River Dee. Now I know/think that y coed means on the River Dee. (I think)
Rode into the delightfully unchanged by progress village of Ellesmere where I enjoyed a civilised coffee and Victoria Sponge Cake in a very comfortable establishment. 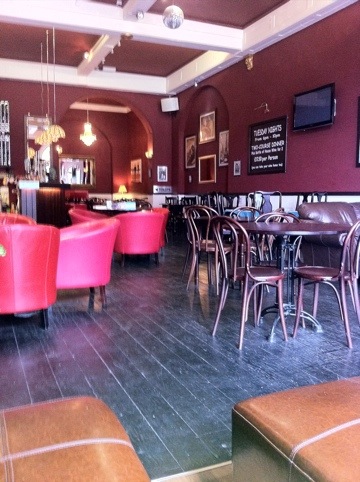 The River Dee led me into Chester, which was every bit as engaging as my friend Nick Brush had led me to believe. Streets full of fascinating old half timbered buildings, an enormous cathedral right in the centre of town, a tranquil riverside walk. So why will I always remember it as the place where I lost the key to my bike lock and had to cut it off right in the busiest part of the city centre. Another old friend in the bin (the lock, not Nick). At this rate I’ll be chucking the bike away tomorrow! 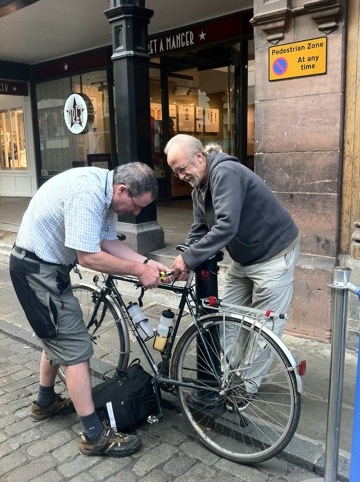 Never mind. The Happy Guest Hotel were very accommodating. They let me sleep with my bike and even provided a sheet to park it on. 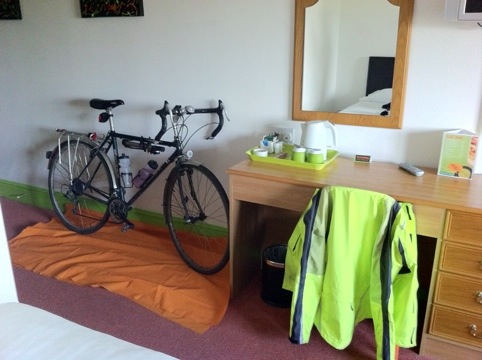 Tomorrow looks a little more challenging. Slaidburn is reached via several inclines. I may need that rest day soon.

Day 7 Warrington to Slaidburn.
72 miles
A pleasant ride over country lanes to Wigan then rising to 800ft over the moors, short sleeve riding with views over the reservoirs then through Blackburn to the Fells. Challenging uphills and high speed downhills through countryside whose high rainfall (believe me) produces dozens of fast flowing rivers and streams.
Rode up the long steep hill coming out of Slaidburn so as not to start the day with it in the morning.
Comfortable overnight in Giggleswick in a Guest House fill of interesting features. The proprietors kindly gave us a donation when they found out that we were supporting a charity.

Day 8 Slaidburn to Carlisle
83 miles
Well, riding up the hill the day before was a waste of energy! The route doesn’t go that way!
Set off marvelling at a bird of prey soaring over the fields, then within 5 miles gained my first puncture! Caused by a thorn in a gateway.
Changed the tube and then within 50 yards there was a bang and I’d got another! lucky I’d brought 2 tubes. Phoned Jon to pick some more tubes up in Kendal. (more useful than mint cake)
Tough (for me – but not for the squaddies Jon saw flying along) few miles over the Fells. Long climbs of up to 1073 feet then down and back up again. Heather and gorse clad hills, isolated stone farmhouses, waterfalls – plenty to photograph here.
Speeding downhill after yet another puncture I missed a signpost and added 5 miles to the days total retracing my steps, then up 1000 ft again to Shap and over Shap Fell in a thunderstorm.
Finally joined the A6 at Penrith and reached Carlisle in the dark at 8pm.

“They tell me that the tail end of Hurricane Katia is on it’s way. Might make life interesting.”
Well it was interesting but for the wrong reasons. Pushed the bike out of the B&B (yes they lit me sleep with my bike too) and found a very soft tyre. Replaced the tube and it immediately blew with a bang. This was when I finally learnt what most cyclists already know. If you have a hole in your tyre (like I had through a displaced brake block rubbing) then when you pump your tyre up to 100psi there will be no support for the tube and it will go bang. Like mine did. Twice. Now I understand. Luckily Halfords opened at 10am and were only 400yds away so an hour later away I went with all new stuff.
After an hour the heavens opened and a 18 mph headwind developed. I thought this must be the hurricane but apparently thats not due till tomorrow, this is normal. Crawled into Dumfries soaking wet and freezing cold, and desperate for a hot drink. Had a large cappuccino in a freezing pub while Jon & Lin kindly returned with a warm, dry shirt. Oh the joy of having a backup crew! 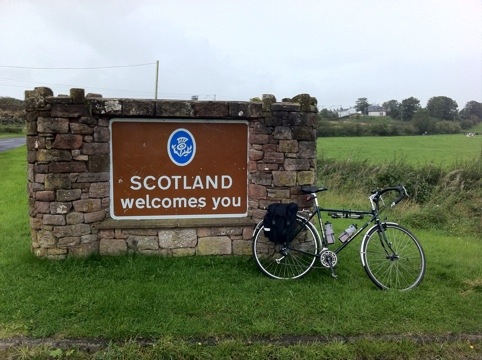 Three much warmer hours and 25 miles later (its heavy going into a 18mph headwind – believe me) I had seen my first loch and rolled into the B&B where the owner had kindly put the heating on in my room ready to thaw me out. Comfortable accommodation with a view over the loch. 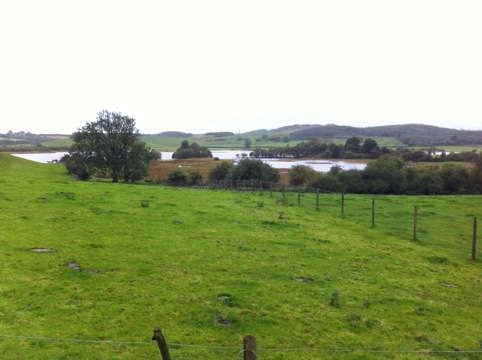 Had a very tasty gammon steak in The Thistle nearby where we enjoyed the locally brewed beer and received an unexpected donation from the landlord. Thank you Jim.
My sister in law informs me that the hurricane will be blowing from the south west. If this holds true then I may be able to hitch a lift on it to Ardrossan, my next stop. If it’s blowing the other way I’m going to stay in bed for the day.
Absolutely no mobile phone reception round here, they tell me it gets better as you travel north.

When I woke up the loch was totally obscured by driving rain. This abated a little and so like a lamb to the slaughter, off I cycled.
Well, I wasn’t quite freezing, and the rain wasn’t quite horizontal. But after an hour of pedalling into a fierce headwind I began to doubt that I’d reach Ardrossan, and if I did, there was a good chance that the ferry would be cancelled. So we all booked in at a B&B in Ayr – though there were times when I doubted we’d reach there. 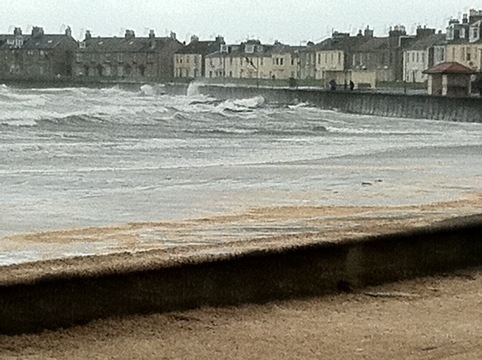 Reached Ayr and found that the sea was trying to get into the town. Used the following wind to get a flyer through Troon and on to Ardrossan which is where the ferry goes from when it’s running. Unfortunately it’s not running.
Although the rain had stopped the wind had become quite hairy, trying to blow me across the road on several occasions, so now was a good time to call it a day and work out how to get to Oban.
Jon found a nice B&B with 10mb wireless broadband so no sitting in Macdonalds to get t’internet for me today. Found an iPhone app for ferry status too.
No wrong turnings today, well, only a little one when I got carried away with freewheeling along the beach road at 25mph and went up a dead end!
I really should fit the new chain and brake blocks I bought in Hereford but the old ones are so mucky and I haven’t got my nice warm garage here.
Maybe tomorrow morning, or afternoon. …..