Took advice from Sandy and Catherine at the Heston B&B (who kindly gave us a donation for the charity) on which route to take, then set off from where I’d finished yesterday but turned right for Glasgow instead of left for Arran. High speed (for me) run into Erskine aided once again by Katia’s zephyrs!
Good roads but very busy – when do I get to the quiet bit? Turned alongside Loch Lomond – which was just a misty grey. 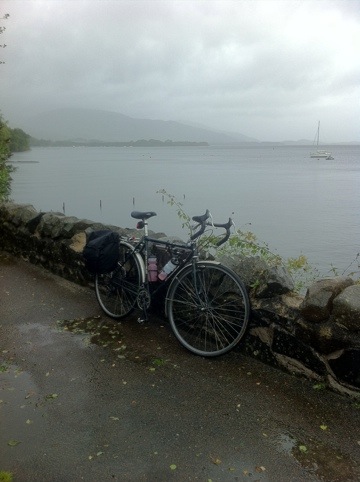 Tipping down with rain all the way. Noticed water teeming down the hillsides in especially made gullies at regular intervals. There must be an awful lot of water up there. didn’t think it could get any worse but apparently it can. 🙂 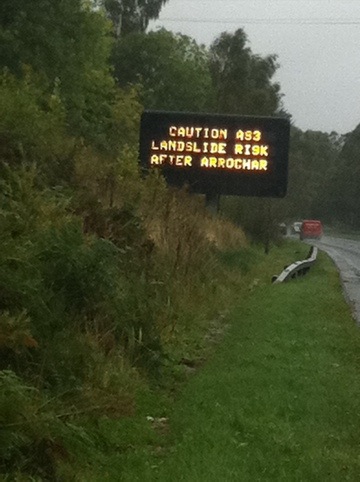 Had puncture number six million and one. Replaced the tube quickly (no messing around with sticky patches in this weather).
I decided that it was too cold, too wet, and too far north for bare legs and it was time to fish out those waterproofs that I’d been lugging around for hundreds of miles. Dug in my pannier and found to my horror that they were size SMALL! I’d picked up Dawn’s overtrousers instead of mine! So tight that I could hardly lift my leg over the crossbar, and they only came down to the middle of my calves, but I no longer have any shame so on they went. I cycled the rest of the way to Tarbet warmer, drier, but looking like a reject from Last of the Summer Wine!
Tarbet seems to consist of an hotel, a B&B, and a post office which was closed. On the plus side however, the power came on just before I arrived so I was able to have a hot shower and start drying my sodden clothing on the radiator.
Clean and dry, I set off to the hotel in search of food, only to find they don’t serve non residents! Well up yours too! Amazingly there was an excellent, if somewhat unusual, restaurant up the road a bit in an old church!
After oven baked filo pastry pouches filled with haggis, served with a side dish of whisky scented peppercorn cream sauce for starters I’d forgotten the musty old hotel and was ready for (yet another) steak & ale pie. Washed down with a couple of pints of Belhaven’s real ale, hmmm.
Now back to the B&B to sleep it off.

A bumpy ride alongside Loch Lomond for an hour or so where I made instant friends with a coach party of American tourists who had never had a cyclist pull over for them before. Took some more grey and misty photos before turning left into the sunshine and proper highland scenery. 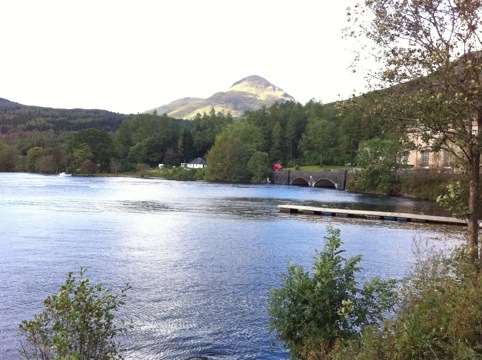 Off with the ladies trousers and stopping every 20 minutes for yet another photo opportunity – this is what riding through Scotland should be about. Salmon streams flowing between towering mountains covered with pine trees, Loch Awe vast and flat before it passes through the hydro electric dam and becomes a massively powerful churning river tearing through the valley.
Met up with Jon and Lin at the visitor centre for a quick coffee before deciding to do the last 18 miles with no kit (or spares) so as to reach Oban before the shops closed. The trouble is that there are too many things to photograph! My first Longhorn – which refused to face the camera. A village over the Loch. The bridge at Connel, the boats moored on the approach to Oban. 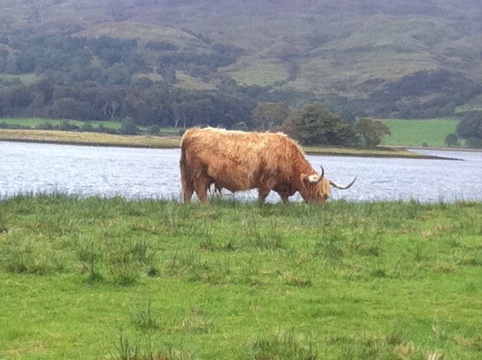 All these things conspired to delay my arrival till 4.45 despite my frantic pedalling! However two shops later and I was the owner of a pair of full length, MEN’S, overtrousers, which reached my ankles and would help ward off the forecast 2 degree winds. The sun was still shining and I could forget today’s puncture, a shower at the B&B and I was ready to face the world again.
Oban is a pleasant town, with a small harbour, fishing boats & ferries coming and going – could be Cornwall really.
We had a look round the shops before enjoying Italian pasta and a pint. Took some pics of the harbour at night, should be interesting to see how many of these photos are worth keeping.
Washing dried so quickly on the radiator that I did some more, going to be a hot and humid night in this room. Pity I can’t store my cycling shoes somewhere else. 🙁 the room smells like a swamp!
Long day tomorrow – hope the wind is going my way.

Bit fresh in the mornings up here. I’ll need a pair or gloves if it carries on like this. Once the sun rose over the mountains, however, it turned into a bright sunny day. Massive brown mountains rising up on the right and the blue water on the left made a perfect backdrop for every photo, but I had a lot of miles to cover so once again had to resist stopping every 2 minutes for pictures. 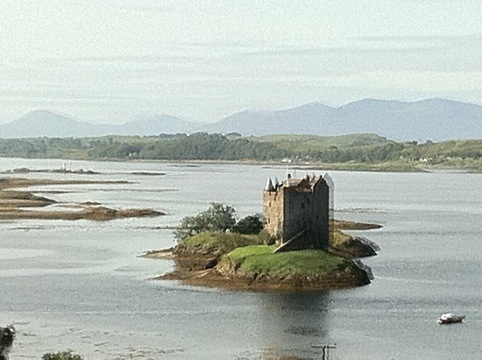 After 15 miles my chain was starting to flop about so much that I feared it would get caught in the wheel, so after a coffee break near Stalker Castle we carried out some much overdue maintenance on the bike in a lay by. Much better going downhill now with brakes.
The weather stayed bright and warm all day, the ride along the lochs was fairly flat, fantastic countryside.
Stopped briefly at Fort William, then pedalled on past Ben Nevis, no snow yet thank goodness – I haven’t brought any snow chains
Arrived at the B&B just after seven, ready for a hot shower. Had an excellent dinner with more haggis in a restaurant by the side of the water.
Not quite sure which water as this is where the Caledonian Canal joins Loch Ness. Need to investigate in the daylight.
Cycling shoes now have to live outside at night. Maybe I’ll wash them in the loch. That’ll bring Nessie out if anything will!

No such luck I’m afraid.
Checked out the flight of locks on the canal, must be a pleasant trip from the sea, past Oban, down the canal into Loch Ness.
Nearly spoiled it all when I failed to spot a pothole due to looking up the canal. Hit it at speed and it made such a crash I thought I had surely buckled a wheel – but no, Dawes wheels are tough and we carried on intact.
Loch Ness was grey and colourless, but impressive by it’s sheer size. Turned north by Castle Urquhart which would be interesting if you could see it but they’ve grown tall bushes along the road so you have to pay to see it. Ah well, maybe next time. Still plenty of other things to see. 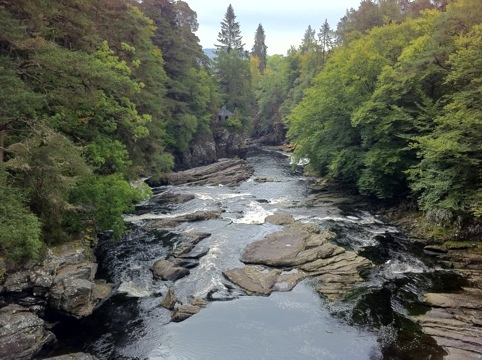 I thought I could do hills now but the next one had me stopping and getting my breath. Climbed to 778 ft in about a mile. Now that’s steep. Still, what doesn’t kill us makes us stronger. 🙂
Pouring rain now as the Moray Firth comes into view. Drilling platforms floating in the distance. 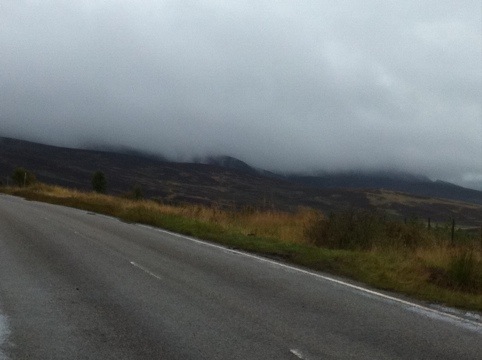 Long downhill into Bonar Bridge (I like a downhill finish), before heading off in the car for the only accommodation we could find. 21 miles away next to Loch Shin.
After 11 miles of tearing down a single track road (they stop serving food at 8pm) where we passed multiple longhorn photo opportunities we arrived at the lochside hotel. At last.
This rambling building was so full of character that we kept losing our rooms. Enjoyed steak in a tartan lined dining room, and used what will probably be the last wireless network connection of the trip. Two legs to go.

“Should be a shorter day today, so time to take photos before setting out. Accommodation not sorted yet – could be sleeping under a hedge!”

Nope. The first address Dawn sent us had vacancies so accommodation was soon sorted.
Sun shining so rode the first 25 miles of the day in shirt sleeves.
How about this for a youth hostel. 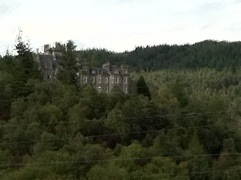 After Lairg the road turns single track with passing places all the way to Tongue. Every expense spared here.
There’s a climb then the route quietly twists between the mountains. Hardly any traffic, lovely sunshine, and scenery that’s like Dartmoor only much bigger. The mountains seem to go on for ever – the landscape is slightly surreal. No side roads, just the occasional – and I do mean occasional cottage or farm. 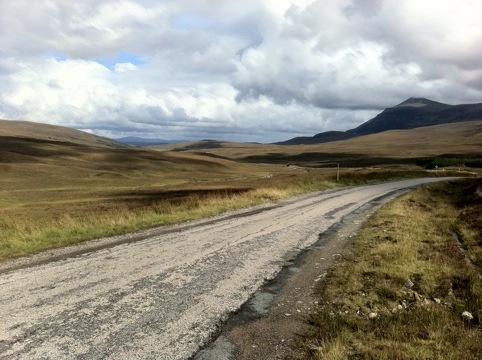 Just the place to have yet another puncture! More torrential rain for the last 8 miles into Tongue, where I was pleased to find 2 hotels, wifi, and good food. Downhill finish too!

Too many hills for a final day. Climb after climb for the first 20 miles. Wished I hadn’t had such an excellent (heavy) full Scottish breakfast. Legs gone, granny gears on all the hills.
Then the rain stopped and the sun (sort of) came out. Fired up by a couple of Lucozade energy drinks and chocolate, and the fact that I found I’d overestimated the mileage by 4 miles, I perked up and pressed on against the Atlantic (?) wind.
The constant bumping of the tyre patch became tiresome (sic) so I fitted my last inner tube and pumped it up to full pressure, only for it to fail 6 miles from John O’Groats. Pumped it up every mile. No problem – nearly there now.

Got to JO’G about 4pm, no signpost (“due to unforseen circumstances”) so we had to use the one painted on the wall and take our own photos. That was more fun anyway.
Cafes both closed. Toilets 20p, knocked her down to 13p (all I had in change).
Bought some cheap souvenirs (20% off – the place closes for the winter on Friday). Very bleak and exposed place but under development. Not much going on here, people tend to arrive, take their photos, load up and clear off home. 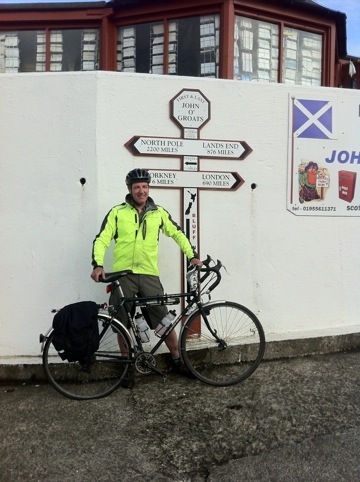 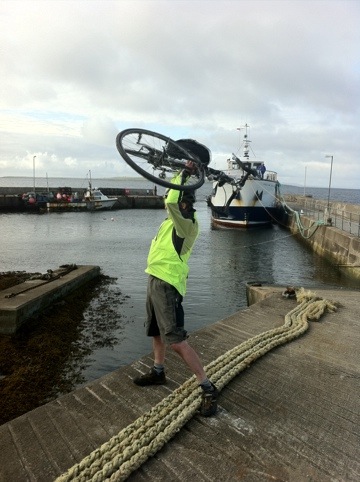 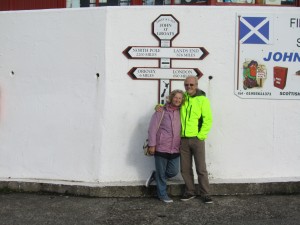 Well that was it. 1095 miles. I must admit it tested my tired old body, but I have no permanent injuries – my bottom can already be sat on.
We got to see some magnificent countryside, enjoyed excellent hospitality, and generally enjoyed mucking about on a push bike.
I’m indebted to the friends, friends of friends and family, who provided accommodation and support. Especially Jon & Lin who gave with unexpected but welcome support when Jon had to stop riding, and Dawn, who even decorated the lounge whilst I was out of the way.
I now hold the world record for punctures incurred (surely) and weigh a little less than I did 16 days ago. Anybody interested in 8 only slightly damaged, inner tubes?
My ancient but classic Dawes Galaxy did the job with no breakages and was a joy to ride – I could never justify buying a modern bike now – after all, this one was good for over 1000 miles!

Thank you so much for all of your texts, emails, comments, advice, and of course donations – they really helped.

Despite the rain this was an enjoyable little adventure for all of us, and at the same time we had managed to raise some funds for a worthwhile charity.

Would I do it again? No chance. Done that. Still waiting for the T shirt.
Back to Stratford upon Avon and reality.